State Sen. David Gallegos, R-Eunice, left, and Larry Marker of Roswell pose with a petition they filed in district court in Lovington on Friday calling for a grand jury to investigate a host of allegations against Gov. Michelle Lujan Grisham.

A citizen petition asking the District Court in Lovington to form a grand jury to investigate Gov. Michelle Lujan Grisham was filed Friday over the governor’s public health orders on COVID-19 restrictions since 2020.

The sponsor, N.M. Sen. David Gallegos, R-Eunice, along with Larry Marker of Roswell, filed the petition in the Fifth Judicial Court with approximately 1,000 signatures from Lea County registered voters.

The petition requests the “District Court convene a grand jury to investigate Governor Michelle Lujan Grisham ‘Defendant’ for crimes of Malfeasance in Office, Misfeasance in Office, Violation of oath of office and Maladministration.”

The petition further states the governor “under the guise of emergency authority ordered and authorized numerous illegal actions that included invasions of the constitutionally protected rights of citizens of New Mexico. Defendant has abused and exceeded her legal authority with numerous consecutive sua sponte (on her own volition) renewals of a public health emergency.”

The petition also states “Defendants mandates including but not limited to business and schools closures, stay home and lock down orders served no practical purpose as to a reduction in number of covid infections and death in New Mexico comparative to other less regulated states.”

It also says the pandemic orders were “inequitable” and “draconian” and “inflicted severe, long term and irreparable harm on the citizens of New Mexico.”

Organizers of the petition list Article 2, Section 14 of the New Mexico Constitution as a path to start the process to hold “elected officials accountable and/or start the process of removal of elected officials above a County Commissioner.” Section 14 outlines in the N.M. Constitution the requirements to be met for citizens in a county to ask a court to form a grand jury.

Gallegos and Marker see a grand jury as a way to hold the governor accountable for the public health orders, up to and including removing her from office. New Mexico has no recall process for elected officials in offices higher than county commission, but Gallegos and Marker think the grand jury process might be a new path to try. 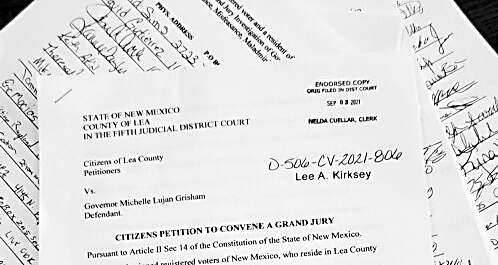 According to the press release announcing the petition, a judge may only dismiss the petition for three reasons: lack of valid signatures, specific charges not within the scope of grand jury inquiry, or the violation occurred outside of the geographical area. If the petition meets all three criteria, then it will proceed to grand jury.

Gallegos stated in the press release the reason they are pursuing a grand jury is due to the fact the “judicial system was not allowing us to get into court. Judges are dismissing cases based on lack of standing even though they could have granted it based on the case being a ‘matter of great public importance.’”

Of the four court cases previously filed by Gallegos against the governor’s health orders, three state and one federal, all were dismissed by judges citing lack of standing. Marker said in a press release he has had the same experiences with cases he has filed at the state level along with the restaurant cases, in excess of 20, that have all been dismissed due to lack of standing.

“The citizens petition for grand jury is the remedy for this. The citizens of Lea County give ‘standing’ to the petition along with the process that will follow,” Gallegos said in a press release.

Gallegos said the gathering of signatures from Lea County voters began just a month ago.

He said the group vetted the signatures to make sure they were Lea County voters and thinks most of the nearly 1,000 signatures will prove to be so.

“This is the first citizens petition to be filed, ever, in Lea County and is truly a historic event,” Markers stated in a press release.

If the grand jury based on a citizens petition is formed to investigate the governor, Gallegos said to his knowledge it would a first in the state’s history, but added the process brings up a lot of unknowns.

He noted New Mexico is only one of five states that allows citizens to petition for a grand jury.

Gallegos will be amending the signature pages weekly in order to accurately reflect the number of people who stand in support of the Citizens Petition for a Grand Jury in Lea County. To contact organizers, Concerned Citizens for NM, go to concernedcitizensfornewmexico.com or at www.facebook.com/groups/concernedcitizensfornm.