Four people have been arrested and a fifth has a warrant for his arrest after allegedly holding a man at gunpoint and robbing him last month.

According to a Lea County Sheriff’s Office criminal complaint, Samantha Roblez, 20, of Hobbs, and Jeremiah Sanchez, 22, Jesus Carrasco, 27, and Miguel Sandoval, 30, all of Lovington, were arrested for kidnapping and robbery after the man reported he was held at gunpoint.

A fifth individual, Joshua Long, has an active arrest warrant in connection to the crime but as of Thursday’s press time, it had not been returned.

The report states on Feb. 22 the victim picked up Roblez from her home and drove to a convenience store in Lovington where they saw Sanchez, Carrasco and Long, who were all in a purple Nissan.

“(The victim) stated that as they traveled to the …Kyle (Street) residence, Roblez kept on assuring a person on the phone that they were on their way and were about to be there,” the report states.

“Sandoval exit(ed) the black Dodge truck and point(ed) a black AR-15 rifle at him,” the report states.

Sandoval then allegedly said, “Get out of the car homie, don’t do anything stupid and don’t reach for your pistol.”

The victim also claimed Sanchez and Long were also pointing rifles at him. The victim got out of the car when Carrasco rushed him and ripped the keys away from the victim, according to the report.

“Carrasco then pushed him to the ground,” the report states. “(The victim) stated Carrasco retrieved (the victims) firearm from the vehicle.”

The report states the victim was then ordered to get into his own vehicle and Roblez drove the victim to his own residence while the others were also in the car.

Sandoval allegedly told the victim while in the car, “nothing personal she’s paying us to do it.”

The report stated Roblez admitted to seeing the men point guns at the victim and they all “ganged up” on him.

Roblez was arrested on Feb. 26 and charged with kidnapping, a first-degree felony; and robbery a third-degree felony. 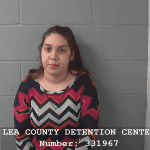 According to courth records, the Fifth Judicial District Attorney’s Office has filed a motion for Roblez, Sanchez, Carrasco and Sandoval to be held in pretrial detention while their case is tried.

If you have information on the whereabouts of Long, contact crimes stoppers at 575-393-8005. You may be eligible for a cash reward, according to a Lea County Sheriff’s Office news release.