Rigoberto Corral Cazares, 33, of Lovington, was arrested and charged with two counts of burglary of a storage building, where he allegedly broke in twice before coming back a third time to erase the security footage of him committing the previous crimes.

According to a Lea County Sheriff’s Office, on January 22 investigators responded to the 2800 block of Six Shooter in Lovington to assist patrol deputies in a burglary investigation.

The victim provided investigators with video footage and identified Cazares as the person entering and exiting her property on three different occasions. 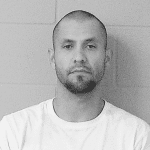 After reviewing the video footage, investigators saw Cazares entering the victim’s property on Jan. 2, at approximately 7:30 a.m. where he allegedly used a tool to break the lock on a storage building door, the report states. He then allegedly removed several items from the building and placed them in the bed of a blue Dodge pickup.

Cazares is then seen driving away from the property only to return the same day at approximately 11:46 a.m., according to the report. Cazares is seen entering the storage building again and leaving with a Bluetooth speaker.

On Jan. 7, at approximately 6 a.m., video footage shows Caz-ares returning to the property and walking to the south end of the residence. Soon after, the camera system shuts down, and the video footage stops.

On Feb. 1, Sheriff’s Investigators interviewed Cazares. He allegedly admitted to entering the property, breaking the storage building lock, and taking several items from the storage building. He also admitted to returning to the property on January 7, to turn off the power to the home with the intent of erasing the video recordings of the previous burglaries from the security system, the release states.

He was booked into the Lea County Detention Center and charged with two counts of burglary, breaking and entering, larceny and tampering with evidence, all fourth-degree felonies. Cazares was released on a $10,000 unsecured appearance bond.