ALBUQUERQUE, N.M. (AP) — The mayor of New Mexico’s largest city is blaming small groups of what he called agitators for violence that broke out hours after hundreds of people gathered for a largely peaceful protest in downtown Albuquerque.

Dozens of small fires were set, windows were broken and police officers say they were fired upon early Monday in front of the historic Kimo Theater.

Police were responding after the building’s windows were broken and some people got on the roof. Police moved in because they were afraid the building would be set on fire.

Another group tried later to force a confrontation with police but ended up leaving.

Mayor Tim Keller said there dozens of firearms looted from at least one gun shop and that there was damage to numerous locally-owned coffee shops, breweries and restaurants along the Central Avenue corridor. He said he was grateful no one was seriously injured.

While Albuquerque welcomes the right to protest, Keller said gunfire and violence cross the line.

“What we saw last night in downtown was not a protest, it was not Albuquerque,” he said. “Protesting is our constitutional right as Americans. We have the strongest voice when we come together and use it as one and express our outrage.”

City crews spent the morning boarding up broken windows as other workers picked up debris and cleaned off graffiti.

On Sunday evening, several hundred people took part in a march along historic Route 66 in protest of the death of George Floyd, the black man who died after a white Minneapolis police officer pressed his knee into Floyd’s neck even after he stopped moving and pleading for air. The protesters held signs, wore masks and chanted: “Say his name: George Floyd” and “Hands up, don’t shoot.”

When the crowd arrived on the western edge of downtown Sunday evening, they stopped, raised their fists into the air and held a moment of silence for Floyd that was followed by cheers.

Activist Arthur Bell, 35, later told fellow demonstrators he was “tired of being peaceful.” He said his black skin makes him a target for police and that he is fed up with the situation.

Another protest was planned for Monday evening outside police headquarters.

Bell said that demonstration would be different. When The Associated Press asked what he meant, Bell said: “A general never gives out his tactics.”

While elected leaders in other states have been forced to call out the National Guard, Albuquerque officials said there are no plans to make such a request unless the situation descends into chaos. The mayor said officials will do whatever they can to keep it from getting to that point and he asked for the public’s help.

“We can do this without violence on our own city and without more violence on each other,” Keller said. 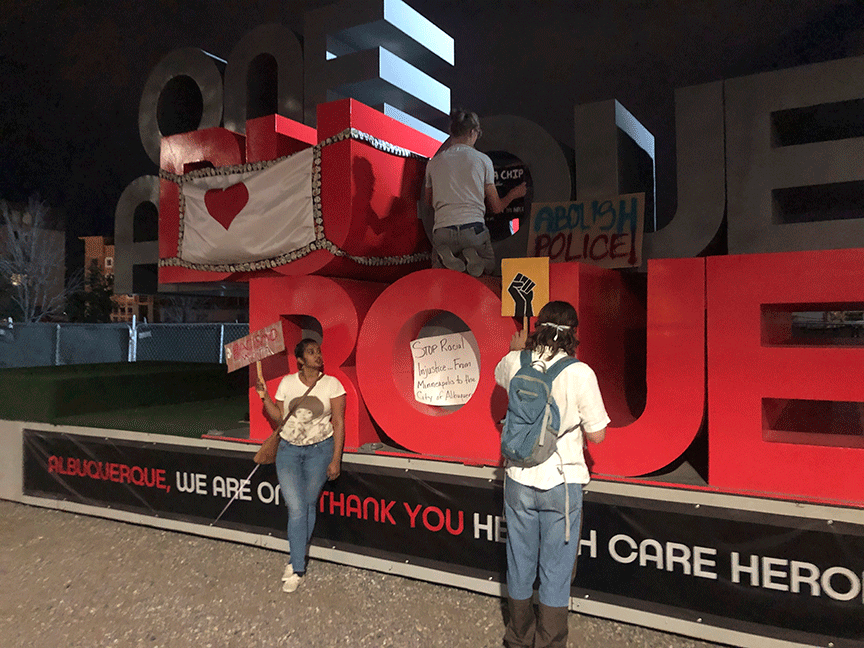 City officials also talked about court-mandated efforts over the past several years to restructure the police department, changes to the way it deals with excessive force and the inclusion of anti-racism and ethics training for police officers and all city employees.

Democratic Gov. Michelle Lujan Grisham in a statement Monday afternoon condemned the violence in Albuquerque, saying she was concerned that a small group of people “took a wrong turn.”

“That sort of behavior is an attempt to distort the important work of the peaceful protesters – who have every right to demonstrate in peace – and puts both the protesters and public safety officers at risk,” she said. “Those individuals, I have complete confidence, will be held accountable. There is no place in this moment for hijacking the protesters’ message of justice and non-violence.”