November 28, 2022 Select your Top Menu from wp menus
Home Sports Glider pilot speaks about romance of flying like a bird

The National Soaring Championship has returned to Hobbs and with it comes over 46 contestants from all over the country and even from other countries.

One of the contestants with an intriguing story is Dick Butler, who comes from the small town of Manchester, Tenn., and who is an aeronautical engineer. Butler is currently competing in the open class in a Concordia glider.

Butler has been flying gliders or sail planes most of his adult life and he remembers his first visit to Hobbs was the nationals in 1975. Butler competed in the ‘75 Nationals in a glider he built himself, and is currently competing in one that he built. 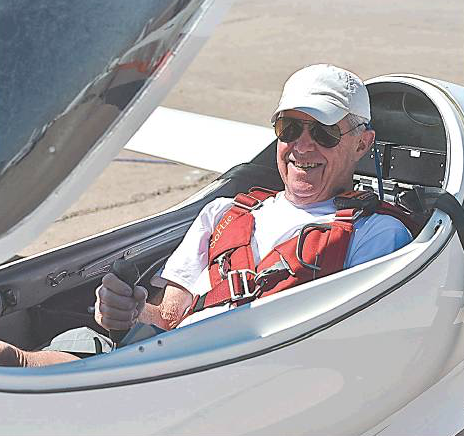 “Yeah and the plane I’m flying now I built,” Butler said of his first glider. “It’s not such a special thing, but it’s a special thing for me. My background in my professional career was an aeronautical engineer, so it kind of comes along the lines of what has been my interest for many, many years.

When asked about the difference of building his own glider and getting one made, Butler pointed at having the vision of the glider.

“Anyone that takes on building a glider, sail plane, or airplane you have a vision of obviously of building the plane and flying it,” Butler said. “You usually think that you can complete such a project in a certain amount of time. And it always takes many times more to complete it, and usually it’s over-budget and behind schedule always.”

“But yeah, it’s a gratifying thing to build your own plane and compete with it at the national level,” Butler added.

He mentions that not many build sail planes when they compete, as its easier to buy one built.

“You have to have a romance with building and designing to do such a thing. It’s really not a smart thing to do, but it’s fun,” Butler said.

Butler admits that having a background as an aeronautical engineer was an advantage in building a glider.

“No question about it, an average person just wouldn’t have the background needed from a structural standpoint and an aerodynamic standpoint to do such a thing,” he said. “But I did not do it all alone. I had a lot of help from other people, other engineers, other people who have designed sailplanes through the years I got to know and be friends with. It was really an international effort. The aerodynamics came from Delft University in Netherlands. The structure work came from Germany, although I’m an aeronautical engineer, I was more of a project manager on this thing. I built it myself but I had a lot of help from people who are lot smarter then I am.”

Butler recalls that the first plane he flew was a wooden sail plane that was factory built and low-performance. His second plane was a metal plane he built but was designed by another pilot who sold kits. In the current National Championship he is competing in a Concordia glider that he built. His glider is currently the largest in the open class.

Butler explained the difference between the open class and the 18-meter class gliders.

“The 18-meter and the open class being up to my plane 28 meters is a wingspan thing,” Butler said. “The more wingspan you have, the higher performance the glider is. What you have here are 18 meters so that means if you fly in that class you cannot have more than a 18-meter wingspan, and then in the open class you are unlimited to the wingspan. But something like 28 meters is about the most the large planes have, because the handling quality as you get longer and longer, the ability to maneuver the plane efficiently takes a hit.”

Butler adds that the larger the wingspan, the more of a workload the pilot has.

For those interested in sailplanes and learning to fly one, Butler has some advice for them.

“To obtain a glider pilots license as a young person can have that happen at 14 years old,” Butler said. “What they need to do, regardless of age, is go to a commercial operation and take a ride in a two-place plane with an instructor. And then see if it’s something you want to pursue.”

When asked what it’s like to be up in a glider, Butler compared it to a bird flying in the sky.

“First of all it’s different from a power plane because you don’t have the noise level of the engine,” he said. “The best way to describe it is more like the hawks, the eagles, or buzzards you see because you use the same energy source that they do. That would be the rising aero thermals and you circle to gain altitude and then you glide to the next thermal or turn point if you are racing.”

Butler summarized the entire sport as a romantic experience where one does not need to be in competition to truly enjoy the marvel of being a pilot in a glider.

“The sport, just as a sport to enjoy the beauty of flying and the romance that goes with it, you don’t have to compete,” Butler said. “It’s such a wonderful sport just flying for recreational purposes. It’s quite a feeling of accomplishment to be able to climb up on the energy of a thermal and then go cross country, you don’t have to be racing to do that. It’s a lot of fun.”

“In terms of pure flying, there’s nothing more pure than a sailplane,” Butler added. “It’s close as you can be to a bird, so if that is satisfying to you, then you will enjoy soaring.”

Peter Stein/News-Sun The only commute an undefeated No. 1 football seed should have for a …