Air travelers may soon have a choice to fly to either Denver or Houston from the Lea County Regional Airport, instead of just Houston.

“We’re in the process of negotiating an agreement with United to add that flight,” Smith told the News-Sun. “It would be one flight a day, direct from Hobbs to Denver.”

He told the commission United Airlines is ready to start the new flight to Denver on Oct. 28. Flights to Houston began in June 2011.

Smith reminded the city commissioners that Hobbs and Lea County have set aside $2.3 million per year in subsidies to United Airlines, split evenly between the two governmental entities, depending on the number of riders using the air service. 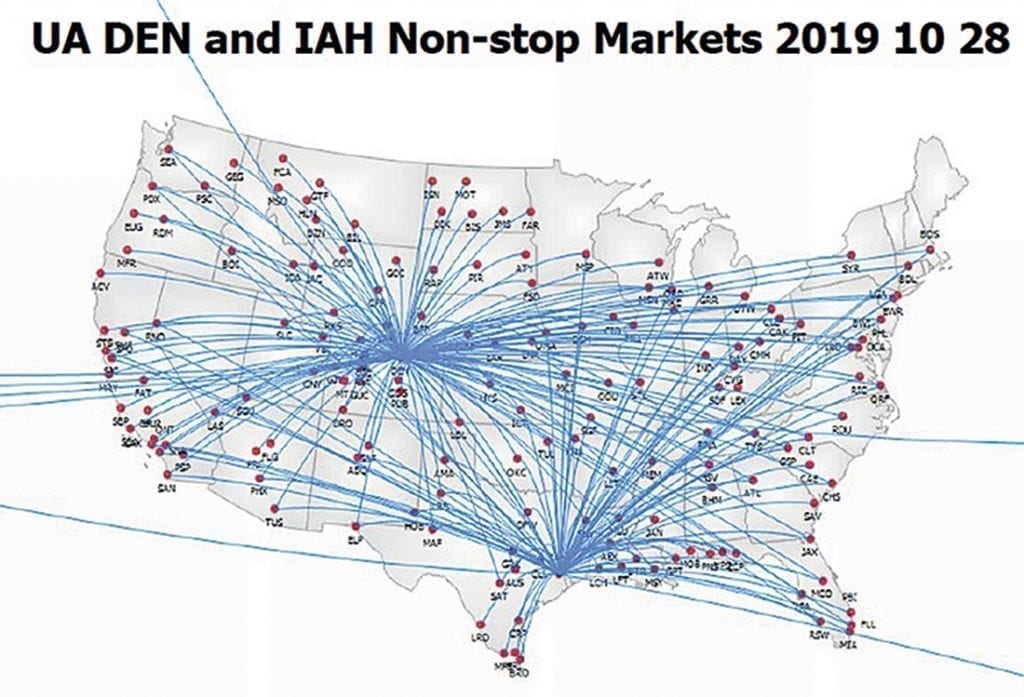 Due to increased ridership, only $326,721 had been spent by the end of March, nine months into the fiscal year, and average load factors (number of seats sold versus number of seats available) has been 71-79 percent the last three months.

With those higher averages, Smith pointed out some flights may have been 60 percent while others more than 90 percent filled.

‘We feel like there’s a great opportunity to access more markets and cities that are very important to the oil and gas industry. They are in the Rocky Mountain region and out west. We think it’s a great complementary service to add, especially given the expansion that’s going on out at the airport.’
Finn Smith
EDC of Lea County chairman

With the flights being fuller this past year, the EDC’s airline committee had asked United about adding an additional flight to Houston. United came back with a different suggestion.

“Why don’t you look at Denver,” Smith said was United’s suggestion.

“When we (the EDC airline committee) looked at this, it was a really strong complementary service,” Smith said.

Smith anticipates an increased cost of $500,000 to $600,000 would be associated with adding Denver to the contract, so the committed $2.3 million remains mostly intact, with no new exposure or risk to the governments.

“We feel like there’s a great opportunity to access more markets and cities that are very important to the oil and gas industry,” Smith said. “They are in the Rocky Mountain region and out west. We think it’s a great complementary service to add, especially given the expansion that’s going on out at the airport.”

He pointed out the weather would be less likely to hamper successful travel.

In addition to new connections from 57 markets and to 44 markets from Denver, Smith told the commission key benefits include a third daily flight at complementary arrival and departure times from what currently exists to and from Houston.

Departures from Denver also connect to Calgary and Edmonton in Canada, he added.

Smith told the News-Sun the presentation at the city commission meeting was just for discussion only.

Neither commission has scheduled to vote on the Denver flight.

Flights to Houston began in June 2011 after the EDC developed a contract with United.

“Having this airline, it makes Hobbs stand out in the Permian Basin as, not quite a Midland or an Odessa, but a serious player,” Smith said of the Houston flight.

Even though they did not vote on the proposals, several on the Hobbs commission voiced support.

“I fly on this quite often. I think this will really open up availability, especially coming back,” said Hobbs city commissioner Chris Mills after Smith’s presentation. “This sort of thing will really open up the convenience of flying in and out here.”

While the flights to Houston and Denver cater to the oilfield and the needs of that industry, Mayor Sam Cobb said the additional flight possibilities were a plus for other businesses.

“I think there is going to be a lot of other companies that are not especially oil and gas related,” Cobb said, “that this opens up the community for them to come in and do business.”