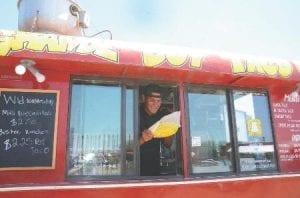 After three years of driving oilfield trucks, three cousins from Lovington decided working out of a truck wasn’t so bad, but it was missing something — tacos.

Kevin Espino, 24, Ricardo Antillon, 25, and Joel Valdez, 22, recently opened Grande Boy Taco Co. at 212 W. Ave D. But their journey in entrepreneurship has not been an easy one. That hasn’t stopped the three young men from starting their own business, which they said they hope will bring the local community together through their food.

“During the summers we would always come back from school and we got our CDL licenses and drove trucks to pay for school,” said Kevin. “We would always call each other on our radios and I’d say, ‘It would be awesome to start a food truck and sell some tacos.’ So we were just like let’s go at it. Why not? What do we have to lose?”

After the three cousins all agreed to become partners in the new business, Joel and Ricardo set off to find their new food truck.

“When we first started we decided we were going to buy the (food) stand in Mexico because of our budget,” Kevin said. “We thought it was probably better because we were taking dollars from here over there and could probably get a better deal. Ricardo and (Joel) went to go look for some. We ended up buying this truck in Juarez and we thought it was the coolest thing. It already came with a little kitchen.”

The three business partners brought their new food truck back to Lovington and visited the environmental department to get a permit, but unfortunately the food truck they purchased in Mexico was not up to par to the National Sanitation Foundation regulations.

They were given a stack of papers on how to get their food truck to meet the required standards.

“We had to rebuild the whole kitchen ourselves,” Ricardo said. “Throughout the process we learned about electrical work, plumbing — we have some welding experience so we had to do all that. We had to install new windows, a hood, an exhaust — everything from the bottom up.”

With the food truck rebuilt and up to code, the three cousins decided they wanted to build a patio with seating for their Grand Boy Taco customers. Their uncle, Daniel Valdez, who owns Robert’s Oil & Lube, 300 W. Ave D, offered them the lot next to his business to build their patio and park the food truck.

“We had this idea of having a patio and outdoor seating,” Kevin said. “We were actually building one, but again, we didn’t know about all the regulations and permitting. We had already finished it and all we had to do was put the roof on it but the state inspector got there the day we were done and he said, “I have to red tag you guys. You can’t build anymore.’”

“We had some tough times,” Kevin added. “We were like, ‘This is too much. We’re done.’ But then we were like no let’s just push through.”

The three entrepreneurs continued forward and found an empty building next door to the original site they had planned to open and started selling asada tacos, al pastor tacos and shrimp tacos.

“We wanted to make a simple menu where it wouldn’t be too hard for people to choose,” Kevin said. “It’s simple and we have better quality on the food and we can make it easier for people to order. It also speeds up the process in you receiving your food.

Kevin is the head chef who has been cooking since he was six. Ricardo said with both of his cousins being from Mexico they’re able to offer an authentic taste to the tacos they sell at Grande Boy Taco.

“Joel is from Chihuahua so he kind of inspires the authenticity and has a lot of creativity and good cooking background,” Ricardo said.

Every Wednesday, Grande Boy Taco offers a secret menu that is revealed that day. Ricardo said they try to offer different tastes for their customers to explore.

“We want to venture into those limits that people set around here and we want to reveal how good authentic food is from Mexico,” he said.

Kevin, Ricardo and Joel said their main goal in opening Grande Boy Taco Co. was to offer a place for Lea County communities to come together, eat good food and enjoy each others company.

“One of the main goals that we had opening this is unifying with different communities and two different cultures,” Kevin said. “That was one of our priorities.

“Lovington is very community oriented and everyone is willing to help and that helped us a a lot,” Ricardo added. “We want to bring the unity of the two cultures and spread that to our little community. We think that with small steps we can take big steps and stop all this violence and racial hate in the world. It’s a small thing but we want to do big things.”