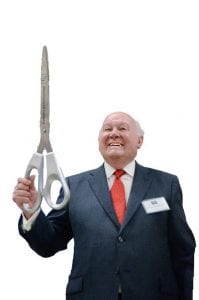 In the company of more than 300 attendees, the Mewbourne family dedicated the new regional headquarters for Mewbourne Oil Company on Business Park Boulevard in Hobbs earlier this week.

Among many dignitaries in attendance, New Mexico Gov. Susana Martinez congratulated company executives for their foresight in spite of the recent oil downturn. She then noted a major upturn in recent months.

“The dedication ceremony today is an amazing, important piece of what’s happening right now in the Permian Basin,” she said.

Laharca Inc. of Deming constructed the 32,000-square-foot office facility at a cost of more than $6 million.

Curtis Mewbourne, the founder and owner of the Tyler, Texas-based independent company, accepted the symbolic key to the city from Hobbs Mayor Sam Cobb before greeting the audience.

“From a very modest beginning, we have now become the largest oil and gas producer in the Permian Basin. But our great assets do not define Mewbourne Oil Company,” he said, touting the culture of honest and fair business dealings.

Mewbourne founded the company in 1965, opened the first Hobbs office in 1977 on South Cecil Street and now employs 136 people in Hobbs. The company has drilled more than 1,000 wells and produces 70,000 barrels of oil equivalent per day.

After the ceremonies, Mewbourne told the News-Sun he especially appreciated the help received from Hobbs city employees.

“The people of the city of Hobbs have been so great to work with on this facility. They’ve been cooperative. They’ve helped us to get this thing going,” he said. “This is a major undertaking. We’ve come so far. We describe it as a long journey.”

Other dignitaries attending the event include state, county and city officials.

Members of the Mewbourne family, Mayor Cobb and company district manager Robin Terrell joined Mewbourne and the governor for a ribbon cutting.

Both Mewbourne and the governor noted the new regional headquarters portends the room for growth and more jobs in the future.

Ken Waits, company president and CEO, spelled it out.

“The future of Mewbourne Oil Company has never been brighter in southeast New Mexico,” he said. “This spectacular new office is a commitment to our people, the City of Hobbs and the State of New Mexico that we’ll be active in the Permian Basin for years to come.”