A Hobbs man was arrested twice in five days for burglarizing separate homes.

Ryan Anthony Davis, 21, of Hobbs, was arrested on Monday for burglary of a dwelling, a third-degree felony. He was also arrested on Nov. 25 for burglarizing a separate home in an unrelated incident.

A nearby homeowner called police regarding the burglary and reported seeing someone break into his neighbor’s home on the 600 block E. Yucca, and was seen leaving on a bike.

“Ryan stated he had taken the tools from a residence because he needed money,” the report states. “…Ryan stated he took a charger from the garage and then went into the storage shed and took a box of tools. Ryan advised he also took a bike that was sitting outside.”

He appeared Monday in Magistrate Court and was released on a $5,000 unsecured bond following his first appearance. Just over an hour after his first appearance was scheduled, Davis was arrested again for a separate burglary that happened on Nov. 24.

According to the Hobbs Police Department criminal complaint, a victim called police after noticing someone had broken into his home on the 400 block W. Byers.

The report states a screwdriver was found outside, next to a shattered window. The victim told police he had video surveillance recording the break-in.

“ (The victim ) advised he knew the subject in the video was Ryan Davis because he had broken into his house previously,” the report states.

In the video, the officer states seeing a man with his face covered in the backyard and trying to break in through the garage.

“The male walks towards the residence and goes out of camera view,” the report states. Three minutes later Davis comes back into camera view “carrying two swords and walking a bicycle.” 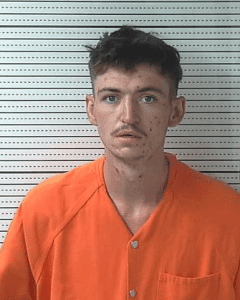 The victim reported the bike was his and the swords were “Katan replica swords” worth $100 each.

After being arrested on Nov. 25, the officer questioned Davis about the burglary from the day before. Davis was allegedly wearing the same clothes as the surveillance video turned over to police.

“Ryan advised the subject was him and he was being dumb when he broke into the house on Byers,” the report states. “Ryan advised he knew the homeowner of the residence…He stole the bicycle and swords because he needed money and he sold them.”

According to court records, for the burglary on Nov. 24, Davis had his first appearance on Tuesday and was released on a $3,000 unsecured bond.