June 23, 2021
Home Local News Chickens have their day at the poultry show

When it comes to poultry Ethan Kneese and Cadi Godwin know their stuff — at least in the eyes of judge Floyd Starkey who decided Kneese and Godwin were this year’s junior and senior showmanship winners.

The Lea County Junior Stock Show poultry competition gives out the same awards as all the other shows. However, winning showmanship requires a bit more from the competitor.

“There’s a lot of reading,” Kneese. “There’s a lot of, you have to look at your bird. Decide if your bird is good or not to bring to the fair. I spent time to do this. It took forever just reading on the bird.”

Rather than just working with the animal, poultry competetors are interviewed on their knowledge of their birds. Getting asked questions such as why they were picked, how much protein they eat, and how many eggs they produce. 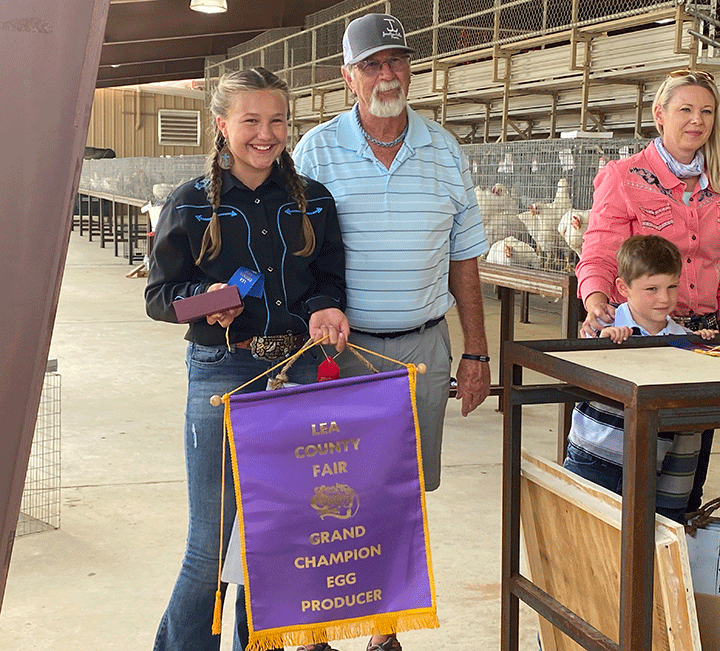 Kneese not only spent time hitting the books to prepare for the poultry show but also worked with his birds, which paid off. He entering in the standard fancy and brought home grand champion for a hen he brought.

“I spend an average two-hours a day with them (the chickens),” Kneese said. “To try and keep them gentle and just be able to handle them better.”

Since Kneese was two-years-old he has been around chickens and shown them since he was nine-years-old. He was hopeful when bringing in his now award winning hen.

“I was hoping she would do well, I was very shocked that she got a grand,” said Kneese. “I was not expecting it.”

Kneese walked into Friday’s show confident, and won this years senior showmanship. He say’s he is excited to have won because the judge is double certified with the American Poultry Association and the American Bantam Association.

Godwin, 12, is going into the seventh grade this year at Houston Junior High School and is this year’s junior showmanship winner. Godwin said she was anxious to speak to the judge for the showmanship portion.

“It’s a little bit more nerve wreaking because you have to explain the parts of the chicken,” said Godwin. “The chicken will tend to freak out. It’s complicated because you’re having to show them.”

Godwin also brought home grand champion for her egg producers. She has been raising chickens her whole life, but started showing at the Lea County Stockshow when she was nine, following in her older sister’s footsteps.

“My favorite part of it is just getting to be at the fair and just getting to work with the animals that I have,” said Godwin. She later added she spends up to an hour everyday with the chickens.

“We’ve had him for two years,” said Coomes. She later added, “He’s our favorite. He is real sweet.”

Coomes is almost 17 and a Tatum High School student. She dreams of moving on to Kansas State University, and plans to continue showing chickens for the next two years before college.

“We appreciate everything everyone has done to put it on (the livestock show),” said Coomes. Adding the livestock show was put together quickly because of restrictions dealing with the COVID-19 pandemic.

Last but not least, Tyler Graham, 15, brought home grand champion for his broilers. The Tatum High student was eight-years-old when he began raising and showing chickens.

He walked into Thursday’s show not very confident his broilers would do well.

“They were my worst pen,” said Graham. “Because it had a four-pounder in it.”

According to Starkey, the broiler competition had a good selection of top end birds that were great quality.

“There were some real good birds here,” said Starkey. He later added, “It was fun. It was a good show. … They got some good birds over here. Some of the kids were really sharp.”

Public health order’s leading people to wonder if a livestock show would happen left poultry with just over 80 entries, a low outcome compared to previous shows, according to Helen Nave, poultry show organizer.

Clay Walker, Gary Allen some of the entertainers for 2021 county fair