Second chance for puppy left for dead with a broken neck

Second chance for puppy left for dead with a broken neck

Korahleah is a 3-month-old pitbull puppy that was found on New Year’s Eve clinging to life. The puppy was later rushed to a nearby animal hospital by Brandy Abbott-Ellison, owner of Amazing Grace Pet Rescue, where she is currently being treated for a broken neck and a concussion.

Given the name Korahleah, the female puppy was found by Hobbs residents Becca and Billy Titus. “Korah” was rescued by Brandy Abbot-Ellison, owner of Amazing Grace Pet Rescue in Hobbs.

According to Becca, it was a normal morning on Dec. 31 for the couple, as she prepared breakfast and her husband, Billy, went outside to take out the trash.

“Billy went outside to go take out the trash and I was making breakfast and he came back inside and said, “We have a problem.” He showed me a picture of this puppy that was laying in the corner of our fence in the alley and it looked like it had Parvo. We called all of the numbers to see if somebody could come and pick it up but nobody was open that day. I told him to call Brandy Abbott-Ellison with Amazing Grace Pet Rescue and she came over and picked up the puppy,” Titus said.

It was when Ellison arrived at the Titus home they knew something was just not right with the puppy — and it probably wasn’t Parvo.

“We didn’t know what was wrong with the puppy,” Becca said. “It didn’t have use of its back legs. When Billy called the puppy and was trying to get her attention, the puppy wouldn’t even lift her head up. We could see where she had peed on the ground and was laying in it. It was so sad.

“You could see her ribs and when Brandy took her for X-rays you could see that her neck was broken. The X-rays also showed the puppy had a concussion that appeared to be a couple of days old. I think somebody just dumped her there because I don’t know how she would’ve gotten there.” 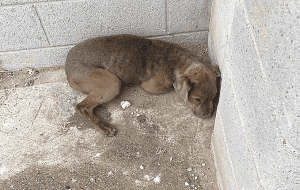 According to Ellison, there were no indications the puppy was hit by a car. With her years of experience, she said she is fairly certain the abuse was human inflicted.

“I take in mostly emergencies,” Ellison said. “So I get tons of animals that are hit by a car. They usually have black marks, or tire tread or road rash, some kind of gravel on them, scratches, she had nothing. Nothing whatsoever. She had zero use of her legs because of the injury to her brain she couldn’t use her legs. The way she was found at Becca and Billy’s, she was placed there. There is no way she could’ve walked there because she had no use of her legs.”

Ellison said there were no fractures or breaks on the rear of the puppy, all of the damage done was strictly near the skull.

“The medulla is what’s broke,” Ellison said. “She was hit pretty hard to break the medulla. That controls her respiratory and once we X-rayed her she was slowing down on her breathing and he (Great Plains Veterinary Clinic and Hospital veterinarian Dr. John Kuitu) told us to get her neck straight. As soon as we straightened her neck her breathing went normal. There are no scratches, no wounds, no gravel, no tire marks, nothing to make us think that she was hit by a car. I don’t very often say human inflicted but I do believe human inflicted. There are no breaks in her body, nothing, it’s just up in her skull where she was hit pretty hard.

Kuitu said he also believes the damage done to the puppy was probably at the hands of a human.

“I can say but I don’t know. There’s not a wound on this dog like she was hit by a car,” Kuitu said. “It’s possible a human did this.”

“She had such a concussion that it just knocked her silly. She couldn’t use her legs at all. It could’ve been a blunt force trauma. I know that she had some nasal discharge but I don’t know if it was spinal fluid or what it was,” said Ellison. “Other than that she has not a single scratch and the X-rays revealed nothing was broken. We had to pry her eyes open due to twitching spasms and the dilation in her eyes was already decreasing.”

Kuitu described the condition Korah was brought into Great Plains Veterinary Clinic, where she is being treated.

“When she came in she couldn’t stand or walk, she was just lying there and having trouble breathing. She had a broken neck that is called an atlantoaxial subluxation which is between the first and second vertebrae,” said Kuitu. “The first cervical vertebrae also had a fracture.

It was putting pressure on her spinal cord and when

I looked at her breathing I could tell right away that there was pressure on her spinal cord. As soon as we made her a neck brace, her breathing turned around. Now she’s starting to sit up and up running around.”

Korah is currently on a number of medications to treat pain and swelling, antibiotics to fight infection, and laser therapy at the fracture site to reduce swelling and pain, and Kuitu expects her to be in the neck brace for six to eight weeks. After that he will assess how she is recovering.

As far as long-term, Kuitu says it is too soon to tell if the damage done to the puppy will be lifelong.

“I’m really pleased with her recovery,” Kuitu said. “She sometimes stares off into space and looks around a little different than a normal dog but it’s getting better.”

“OMG she is so amazing, it is almost like she is learning to walk all over again. It’s just getting better and better every day,” Ellison said. “At first she was taking really funny steps, but last night her steps were even better. Her neck brace will have to be on for a while but she is doing good.”

Those who want to help may donate to Amazing Grace Pet Rescue via Cashapp, $AGPRBrandy or directly to Korah’s account at Great Plains Veterinary Clinic, located at 2720 North Lovington Highway. Ellison can also be reached via email amazinggracepetrescue1@gmail.com or via social media.