Some people never get the chance to live their dreams — they spend most of their lives living paycheck to paycheck.

Others, like former Hobbsan Jose Valdez, got the chance to chase his calling.

On Saturday Valdez graduated with three advanced degrees from Hillsong College in Sydney, Australia. Those degrees are Ministry, Songwriting and Music Performance.

Valdez moved to Australia a few years after graduating from Hobbs High School after what he describes as a calling to do the Lord’s work.

According to Valdez, like any other student-athlete growing up in Hobbs, his aspirations were to be a professional athlete. He later grew out of those dreams and got called to music.

Valdez went to school at Texas Tech for a short period of time and later moved to Dallas — where he put away the music. Valdez said when he put the music away, he always felt a void needed to be filled.

After he gave his life back to God, Valdez said everything just fell into place.

All of his passions, his interests, his drive, all came flooding back.

“I went to a Hillsong United concert years ago and I saw they had a college,” Valdez said. “I thought that it would be cool to study somewhere far away. I was working in Dallas and I wasn’t really happy with how life was. I started praying about and then God kind of brought back this idea of Hillsong College in my head and I started thinking that that could be a real thing. I always wanted to study abroad and thought that would be really cool.”

Jose’s mother, Maria Valdez, said Jose has always been musically inclined since he was a child and she always hoped he would end up doing something with music.

“Oh, yes since he was like 2 years old,” Maria said about Jose’s interest in music. “He has always liked to sing, play instruments. He put it aside for a bit because he loved sports, but it was always inside of him.”

Valdez after sat down with his parents and discussed the idea of wanting to study abroad. They all agreed the opportunity would be best for him and things just sort of fell into place, he said.

“It was the easiest, smoothest transition I’ve ever had in my life,” said Valdez. “The whole application process was so smooth. I got accepted into college, I got my visa granted in all less than a month. It was perfect and everything just seemed to align.

“I had a long conversation with my parents and the crazy thing is my mom had a dream that God was telling her she was going to have to release me and let me go somewhere far away in order to continue the purpose that he has for my life. That was a confirmation that was exactly what I needed to do.”

Life experiences is what Valdez believes led him to the point he is at today.

“Life experiences is what ended up putting me there. God knew the only way I was going to end up reaching my purpose and my goals was for me to give up three years of my life, 8,000 miles away from my friends and family. All of my accomplishments, all of my mistakes is what led me here,” Valdez said. “I got here my first year and it was terrifying. I thought about going home so many times. I didn’t know anybody, I didn’t have any family or friends and I had to live with strangers I didn’t know.

“I had to set up my health insurance, my car insurance, my renter’s insurance, my house insurance, my tax number, all this crazy stuff you normally just want to call your mom and she would do it for you. So I had to kind of do that for myself and it was a real good opportunity for me to become an adult — a real adult.” 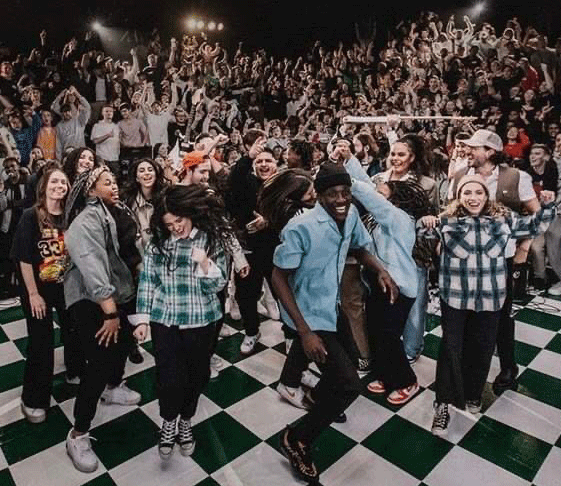 Though Valdez struggled with not knowing anyone, having no family or friends nearby and having to deal with a pandemic molded him into becoming the music success he is today.

“Eventually God’s going to catch up to you and not in a bad way,” said Valdez. “You’re just going to feel empty and like something’s missing until you finally sit down with whoever it is that you pray to. For me, when I tell everyone what I’m doing they’re always just like ‘your life is going up.’ But people don’t know how long that struggle was.

“My music journey, people just think that I came here for three years and I was the only student in the last 20 years to be invited in one of these huge bands. People see my three years here and they’re like ‘three years and you’re at the top.’ People don’t realize I started writing songs when I was 16. This isn’t a three-year journey for me. This is an eight to nine-year journey and it hasn’t always been good or easy. As long as you work your butt off you can reach any goal or dream that you put your mind to.”

Valdez said it was during his second year of college he realized he was “OK at songwriting,” but it was during the pandemic he really flourished.

“All I did was write songs the whole time. I sat down, I locked myself in my room and all I did was write songs for a whole year. I didn’t write them for anybody else. I just wrote them to have a moment with God,” Valdez said. “At the end of it I realized that I was pretty good and I showed some people and they agreed. Next thing you know I’m interning under one of the biggest worship pastors here.

“I get invited to a writing camp to get to know some of the people in the band. Next thing you know I’m writing this crazy song called ‘House of the Lord’ and it ends up getting picked to be on an album and I’m getting invited to be a part of the band. Now it’s probably my greatest accomplishment here. I’m in a band (Hillsong United) that’s the biggest youth worship band in the world. Not just Australia or the United States, but globally.”

Valdez recalls the first time his mother told him that he could sing.

“I still remember the day my parents told me I could sing. I’ll never forget that day,” Valdez said. “We were driving to church and my mother always used to play her Spanish worship music. Of course, playing it time and time again I memorized the words and melodies. I was singing one of the songs and my mom looks back and looks at my dad and says ‘He’s not bad, he’s actually pretty good. We should record him.’ That’s the first validation I ever got that I wasn’t bad at singing.”

And, Valdez said he isn’t close to being done. He has big dreams and goals for the future — hoping to eventually have his own album and record label.

“I signed a publishing deal. I am writing for a lot of artists right now,” Valdez said. “I am writing for Bethel Music, Maverick City Music and I am also getting signed to do my own stuff. I want to release my own worship album within the next year. I will be moving to Los Angeles in February to start writing and recording my album. My short-term goal is to put out my debut album. Long term, five years from now, I would like to have my own record label and a few artists that manage and oversee.

For more on Hillsong church and college: https://hillsong.com/