If the Jal City Council had used data from previous years to plan its budget for fiscal 2021, which began July 1, 2020, things would have been much different today. 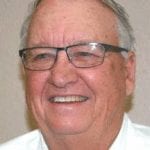 Jal, like other communities in New Mexico, depends on gross receipts tax (GRT) revenue for operating budgets, with the funds paid by the state’s Taxation and Revenue Dept. based on business activity from two months before the month of receipt.

Consumers pay the tax to businesses for goods or services, businesses send the funds to the state the following month and the state returns the community’s share to the city in the second month after business activity.

Although a couple of recent revenue checks dipped, notably in October ($294,000) and January ($384,000), White said he’s hoping renewed business activity will be reflected in higher revenue soon. If so, he’ll be able to justify continuing with renovation of a large building in which the city hopes to construct a new city hall.

“We really hope we’ve hit the bottom on it with all the activity now,” White said. “We’re at 49% of our revenues for the year and we’ve spent 42%, so we’re actually under spending where we projected. That’s through Jan. 31.”

On the city’s enterprise funding, including wastewater and water funds, the city’s income is at 52 percent with expenditures at 47%.

“So we’re still in good shape on both of those funds,” White said.

The city of about 2,000-3,000 residents also has reserve funds that will carry through for more than six months.

Jal Mayor Stephen Aldridge agreed, citing the city’s good fiscal shape as a reason the city council approved withdrawing $1.5 million from savings to initiate the bidding process for renovation of the Burke Building.

A portion of the building has been set aside for a new city hall, with additional portions set for other community uses.

“We’ve had the design done. The council gave staff permission to go out for bid. We have a pre-bid meeting on Feb. 23,” Aldridge said. “We’re going to see what the cost is. If we can afford it and not hurt ourselves, let’s do it. If the timing’s not right and the bids are not right, we can put the brakes on and say let’s wait. That seems like the prudent way to approach that, to me.”

White pointed out construction funding seems to be available, but he’s being cautious, as well.

Bids will be opened on March 16.

“Then, (the council will) probably make a decision in the last week of March, so that gives us February and March to look at the gross receipts and, hopefully, if (the GRT revenue) starts on an upward trend, we’ll start that project,” White said. “That will be a decision the city council will look at and tell me whether I can do it or not do it.”

Aldridge credited the city manager for much of the success in maintaining a good fiscal condition in the community.

“Matt and his staff have done an outstanding job of trying to keep a good level head while going from great guns to where we find ourselves now, and taking a conservative approach to it,” Aldridge said. “We’ve put money in the bank. It hasn’t been a spending spree down here, per se. We feel like we’re in a pretty healthy position. We always keep a watchful eye on revenue coming in and expenditures.”

Curtis Wynne may be contacted at reporter3@hobbsnews.com .