It was the perfect way to send off one of Lea County’s top ranchers. One of Lea’s best people.

Bill Lee, who passed away Jan. 26, had his casket branded with his ranch’s Lazy J brand, during his graveside service Tuesday at Lovington Cemetery.

Bill may have been known as an honorable man. He may have been called “Sen. Bill Lee” during and after his two terms as a New Mexico State Senator. But he was proud to be a rancher.

“Besides my mother (Pat Lee) being the love of his life, daddy loved the ranching business,” said Bill’s only daughter Missy Belz, the second of three kids.

“So to have his casket branded with the ranch’s brand was the perfect tribute,” said Bill’s youngest son, Randy Lee.

It’s not the first time a Lea County rancher had his casket branded. While his children searched for the right casket to bury their father during a visit at Kirby-Ratliff Funeral Home in Lovington, they came across a casket that was made from reclaimed wood off an old barn door.

“We walked into the display area, and there was a casket we saw that was different,” said Lane Lee, Bill’s oldest child. “Then the casket behind it was very similar to our mother’s (Pat passed away in 2015), and the one behind the second casket was the one made of the barn wood. And the more we thought about it, the more we liked it.”

When the boys said they like that kind of casket for their father, the daughter chimed in with an idea.

“I said, ‘Wouldn’t it be cool if they could brand it, since the casket was wood?’” Missy said, “and then (Kirby-Ratliff owner) Bettye Kirby said there was another ranching family, and it was actually Dean Kinsolving’s family of Tatum, that had branded their father’s casket like that. So I was like, ‘I love it!’ and the boys loved it too.”

The branding of Bill’s casket coincides with a seven-year family secret that only Bill, his children and Bettye have known since they buried Pat.

“Bless her heart, mother had this terry cloth dressing robe that she wore all the time when she was at home,” Lane said. “She was a very stylish lady, but this robe was thread bare. And the kids decided that the terry cloth robe needed to go with her.”

“You couldn’t throw it out and it wasn’t worth anything,” Missy added. “You couldn’t even make rags out of it to clean with because the cloth was so thread bare.”

“Every morning she would wear this robe while she got ready for the day,” Randy said.

“It was her morning robe. So we asked Bettye to privately place the robe in Pat’s casket.

Randy said Bettye folded the robe “very nice and tightly” and put it under the pillow in Pat’s casket. “Nobody knew,” Randy said. “Just Bettye, us three kids and dad knew it was there.”

“I never told anyone,” Bettye said of placing the robe under Pat’s pillow. “That was a secret I have always kept.”

The significance of the robe and the branding was that while the robe was Pat’s perfect sendoff in the hearts of her family, the branding of Bill’s casket was the children’s perfect way to say goodbye to their daddy. 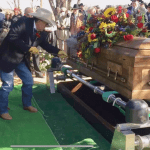 “It was natural,” Lane said. “And we were like, ‘OK, this works!’” Choosing who would brand the casket was also an easy decision. The children said longtime Lea County resident Jimmie Rice had been a good friend of the family and always helped Bill with anything. So had Jose Martinez, who worked for Bill and Bill’s father at the ranch.

“Asking Jose was a no brainer,” Randy said. “He and his family have been part of this ranch and part of our family for 37 years. They are retired, but they still reside on the ranch.”

“Jimmie would come out to the ranch and practice team roping with daddy,” Missy said. “They went to several team ropings together and won money. They were good friends for a long time.”

Missy said she had the responsibility of asking Jose to brand the casket. It was an act Jose and Bill did for decades, whether on their ranch, or while “neighboring” on other area ranches. Branding cattle is just a part of ranching life, and placing the mark of a man’s ranch on anything from cattle to his casket is an honor.

“Jose was touched. He was a bit emotional,” Missy said. “He was sitting on his gloves and had the biggest smile on his face.”

So on the day of the graveside service, the kids said the same Lazy J iron brands and butane bottle used so many times before were brought to burial site at Lovington Cemetery. 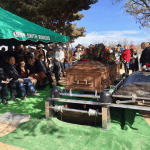 “When they lit the butane to warm up the brands there is this very unique sound of the butane rushing through and you know what that sound is,” Randy said. “That brought back memories of being in the branding pen and helping dad brand cattle. To put that brand on the side of the casket, it was the perfect way to send him off.”

After the service Missy said she was told by many people the branding was something they had never seen before.

While the branding doesn’t help with the pain of losing their daddy, the kids feel good in knowing they gave him that perfect send off.

“Like I said before, next to my mom, daddy loved being a rancher,” Missy said. “This was perfect.”

Long-time Republican takes over at helm of Lea County party