Shoppers and those seeking to pickup prescriptions Thursday morning at Albertsons Market, located at 2402 N. Grimes St., found the store closed and doors locked under order of the New Mexico Environment Department and N.M. Department of Health. The closure orders are related to Gov. Michelle Lujan Grisham’s public health emergency orders, which have been ongoing since March.

The announcement the store would close Wednesday night came as news to both shoppers and store management, as neither the NMED nor NMDoH contacted the grocer prior to posting the press release stating the store would be closed for two weeks — a move that closes the grocery store through the Thanksgiving holiday weekend, putting a strain on the other grocers in the area who with already hard-hit and have a depleted inventory.

“Like it has for many of our neighbors in the community, COVID-19 has touched our team at the Hobbs store with confirmed cases,” United Supermarkets Communications and Community Relations Manager Nancy Sharp said. United is the parent company of Albertsons Markets in Hobbs, Carlsbad and Roswell.

The closure left many with more questions than answers.

The pharmacy inside the grocery store is a concern for many who need medication.

“Pharmacy locations will be open on a limited basis for outside prescription pick-up or for delivery. Please call the pharmacy to schedule a time for pick-up or delivery,” Sharp said.

Pharmacy hours will be limited during the week and on the weekends. In order to pickup a a prescription, or have it delivered free of charge, an appointment must be made by calling 575-392-4503.

While pharmacy services will still be offered in a limited fashion, curbside grocery service will be discontinued during the closure. The closure also means perishable food is still in the store, and Sharp said the company was given permission by the state to remove most of it.

“They gave us a little bit of time to clear out some perishables,” Sharp told the News-Sun Thursday. “We’re looking at our options (on what to do with perishable items). Some of it may be donated, but we’re holding it right now until we make some determinations.”

“Our intention is to continue paying them,” Sharp said.

With the closure of Albertsons Market in Hobbs is scheduled to last two weeks, City officials and corporate management are working with the state to make sure everything is being done properly so the store can get open as soon as possible.

“At the direction of the state, we have closed the Hobbs store until further notice. We are in close contact with state officials and will cooperate with them as we work to re-open the store,” Sharp said.

Hobbs Mayor Sam Cobb told the News-Sun Thursday he was in contact with state officials and corporate management to find a solution to the problem as soon as he learned of the closure.

“We have made contact with the state Environment Department, Secretary (James) Kenney, and they have proposed a reopening plan,” Cobb said. “I have taken that reopening plan to Albertsons corporate officers and encouraged them to have one-on-one conversations with Secretary Kenney.”

“The goal here is not to close stores,” she said. “What we’re trying to do here is reduce the uncontrolled spread that we’re seeing.”

The closing of Albertsons, along with other Lea County businesses on the NMED’s watchlist for potential closure, did not set well with many people in the area, and some lawmakers currently in Santa Fe attending sessions of the Legislative Finance Committee.

Sen. Gay Kernan, R-Hobbs, spoke during the open portion of Thursday’s meeting of the LFC, when the chair asked for updates in each of the senators’ areas.

“In my area, the Albertsons grocery stores in Hobbs, Carlsbad and Roswell have been closed for two weeks because of four rapid responses over the last couple of weeks. I don’t know if that involved a couple of employees at each of those stores, but that’s going to have a huge impact on our area. And could potentially create a sense of panic and crisis, because Walmart in our area is on the watchlist,” Kernan told committee members and those watching online. “So, what will happen is people in Hobbs are going to leave the state of New Mexico and drive over into Texas to shop. They’re either going to take the virus with them, or bring it back.”

“I must urge Legislators around this state, and even in this body, to figure out what we can do to maybe take a look at some of the procedures that are in place right now, though needed, and certainly I’m not critical of the attempts made to keep this virus in check. I just think it’s really concerning when major grocery stores in the area are closing for that length of time. We have a pharmacy in one grocery store that will not be able to provide service to the many people in my area for their prescriptions,” Kernan said. “I think it’s probably going to happen all over the state. If you take a look at that watchlist, they’re going to be falling like dominoes because of the high incidences. If it’s just related to a couple of positives in each of those major stores, we need to take a look and see, we need to kind of reevaluate how those rapid responses are triggered.” 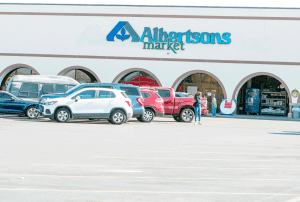 Rep. Deborah Dow, R-Truth or Consequences, agreed with Ker-nan there needs to be more oversight not only of how departments are handling directives, but also directives and definitions being used by Lujan Grisham to direct the agencies closing businesses.

“We’re already hearing word that even certain Walmarts across the state, food and alcohol and beverages is not one third of their operations. So I think inadvertently, maybe an assumption was made or those figures weren’t looked at before the decision – the new directive that came out yesterday (Wednesday) that was revised — that says if you do not have more than one third of your sales from food or beverage that you must close your store,” Dow said during the LFC meeting. “There are areas across our state Walmart does not reach one third of sales from food or beverages. When you consider a small grocer, those people (who can’t shop at other stores that are closed) will be forced into the small grocer – who has a 2-3% profit margin. If that small grocer has to close, I’ve heard one small grocer say $100,000 in perishables would have to be disposed of in a two-week closure. That’s more than their profit margin in a year.”

“Theoretically, Walmart could be closed, and people would be forced into the smaller grocer. That grocer, because of the nature of what COVID is doing, will have cases – that’s inevitable, cases are going up, not down. If that grocer closes, the economic impact could have very long-lasting (effects),” Dow said.

The issue also goes beyond economics and into the area of food security for the state, Dow added.

“We’re spending hundreds of millions of dollars on food security,” Dow said. “I’ve been asked to support a bill, which I’m not going to, but one of the bills that’s coming before us is to subsidize grocers in small communities so they can stay viable when there’s not a viable profit margin, not a viable business model for that grocery to exist in the first place. So, we know a lot of our small grocers have old equipment, and are family owned and operated. One closure could close their doors forever, leaving portions of our state without any access to food.”

The topic of Albertsons being closed was also the main topic at the regularly scheduled Lea County Commissioners meeting Thursday.

“Shutting down a grocery store in our rural area is detrimental to our community,” LCC Chair Rebecca Long said. “It causes unneeded anxiety and in rural areas there’s not many other places you can go. And those other places will be overrun.”

Each of the LCC members drafted a letter and sent it to the Lujan Grisham’s office.

Sharp said Albertsons will continue to make safety a priority, and hopes to have locations open as soon as possible.

“Throughout the pandemic, the health and safety of everyone who walks through our doors has been our top priority. We have implemented important safety measures to safeguard our guests at all of our stores,” Sharps said. “We join our state partners in urging our team members and neighbors to stay home to every extent possible to help curb the spread of COVID-19.”

Cobb said this incident underscores the need to follow directives and take the COVID virus seriously.

“We just have to get serious about respect for others and social distancing and wearing masks. The only way to slow this thing down is to do what the scientific experts say,” Cobb said.

On Thursday, Lujan Grisham announced another record number of positive COVID cases in one day in the state with 3,675, and announced Lea County also had it’s 35th death related to the virus.