New Mexico Junior College is reducing the tuition rate it charges some out of state students after the board agreed to the change last week.

But come this spring, some students living in nearby Texas counties will get to pay the out-of-district rate verus the out-of-state rate.

The move mirrors what four year universities in New Mexico have been able to offer students in neighboring counties in Texas, Colorado and Arizona since 2007. 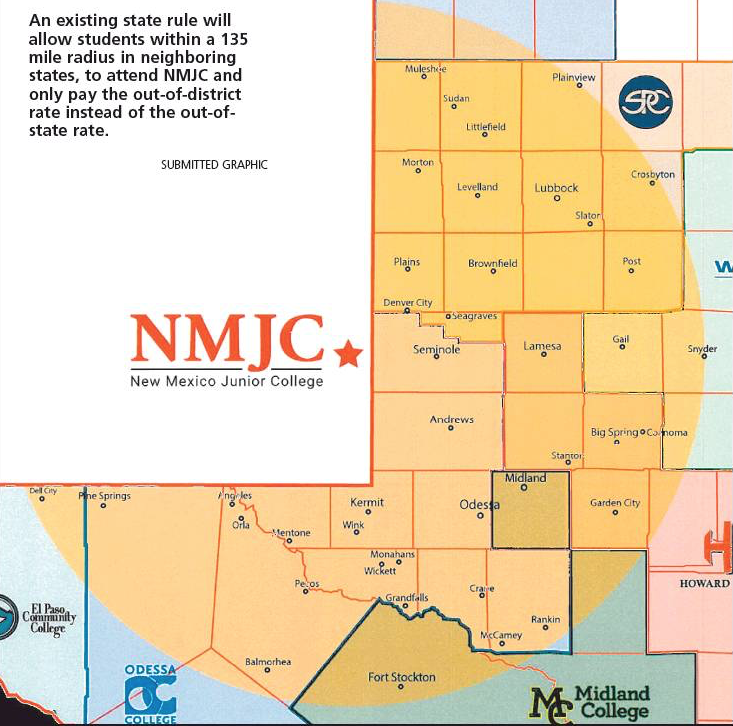 NMJC vice president for finance Dan Hardin presented the idea to the board last week after learning the N.M. Higher Education Department determined an existing state rule that students within 135 miles of a four year school can pay in-state tuition now also applies to two year colleges. Prior to this, two year colleges had been told they could not offer a reduced rate to out of state students in nearby counties.

“We view this as opportunity to draw and market in that area,” Hardin said. “… We just view it as a win win.”

Hardin said NMJC watches what nearby two-year colleges in West Texas charge for tuition to make sure NMJC stays an attractive option for West Texas students. By changing many students in West Texas eligibility to an out-district tuition rate from an out-of-state rate, NMJC will be all the more attractive to attend.

“In our view this a great great opportunity … to capture the student base in West Texas,” Hardin said.

“There is a good opportunity to us to recruit those students not only for the (tuition) cost but because of the ability to house them here,” NMJC president Kelvin Sharp agreed.

The board approved the request unanimously to start in the spring semester.

Vice president for instruction Larry Sanderson said current enrollment was down about 19% from what it was this time last year. However, he said that figure might improve to between 15 and 12 percent as soon as all the paperwork has been completed for dual credit students who are taking their courses at high schools in the area.

He also said that the percentage of students who are taking courses online instead of face-to-face is 35% this year compared to 25% last year.

Sanderson said the college is continuing to offer quality instruction and quality college experience in spite of the changes made necessary for the COVID-19 pandemic.

Sanderson also introduced Cammie Armstrong as the interim director of nursing at the nursing school.

Vice president for finance Hardin also reported to the board oil and gas revenues are down but said he is optimistic as the economy recovers, they will increase again. In the meantime, as officials contemplate budgets, “we need to be guarded and conservative in the way we budget for oil and gas,” Hardin said.

Hardin also asked the board to approve a request to the state Higher Education Department to restore funds taken from the college after the special session of the Legislature earlier this summer.

The document he presented to the board said, “By Sept. 5 of each year, NMJC must submit to the HED any new or renewal request for funding of the Research and Public Service Projects for the coming fiscal year. During the special session, funding for Athletics, the Oil and Gas Training Center, Nurse Expansion, Lea County Distance Learning Consortium were reduced.”

Hardin asked the board to approve a request to HED to restore the original funding for fiscal year 2022 and to add the $50,000 for the NMJC radio station.

He said he did not know the chances of either requests being approved by state, “but you won’t get it if you don’t ask.”

The board approved the request.

Controller Josh Morgan asked permission to notify HED the college intends to offer designated surplus equipment at a public auction at a date yet to be determined. The auction, by law, cannot occur in fewer than 30 days from the HED’s approval, but setting the date also depends on the progress being made in controlling the Novel Coronavirus.

One member of the board asked whether Morgan had contacted other schools to see whether they wanted any of the equipment and he replied there “is not much interest this year.”

After approving Morgan’s request unanimously, Norma Faught, administrative assistant to the president of the college, announced the next regularly scheduled meeting of the board will be Sept. 20 at 1:30 p.m.