The City of Hobbs announced Thursday in a news release the renovation and upgrade for Del Norte Park had been completed.

“We look at Del Norte Park as a destination park,” Wade Whitehead, Hobbs superintendent of Parks and Open Spaces, said. “People come around and go to that facility, and we have the only dog park in town there. There is a performance area, like an outdoor seating area. Replacing the playground with a new, up-to-date playground, I think will just make it a destination.”

In mid-March, the 20-year-old equipment was removed and in the following months, RGH Landscape of Amarillo began installing the new equipment.

Bryan Wagner, Parks and Open Spaces directory for the City of Hobbs, hoped in early June the update would be completed by mid-July. However, the time frame was pushed back because the city had to switch gears, according to Whitehead.

“We originally entered into this project where we were going to do it in house,” said Whitehead. “City staff was going to do all of the labor. Through a turn of events … things changed and we ended up contracting it out.”

The new equipment includes play areas for 2 to 5-year-olds and 5 to 12-year-olds, as well as new swings, slides, and shade over the area.

“In the public playground sector there is two different age groups, there’s a 2 to 5 and there’s a 5 to

12. They’ll be both components to those,” Wagner said when the equipment installation began. He also said the new playground is accessible following the American Disabilities Act.

Meghan Mooney, communications director with the City of Hobbs, added that the playground will also have shaded areas and brings something new to the community.

“While so many things are different in this day and age, there is something new and exciting to experience,” Mooney said.

According to Whitehead, the playground is around 6,000 square feet, and is split up for to meet the age groups play needs.

“There is play features that target that age group,” said Whitehead. “Small children can’t reach large gaps, nor do they want to go down a taller slide. They may be more audiovisual type engaged on the play features.” 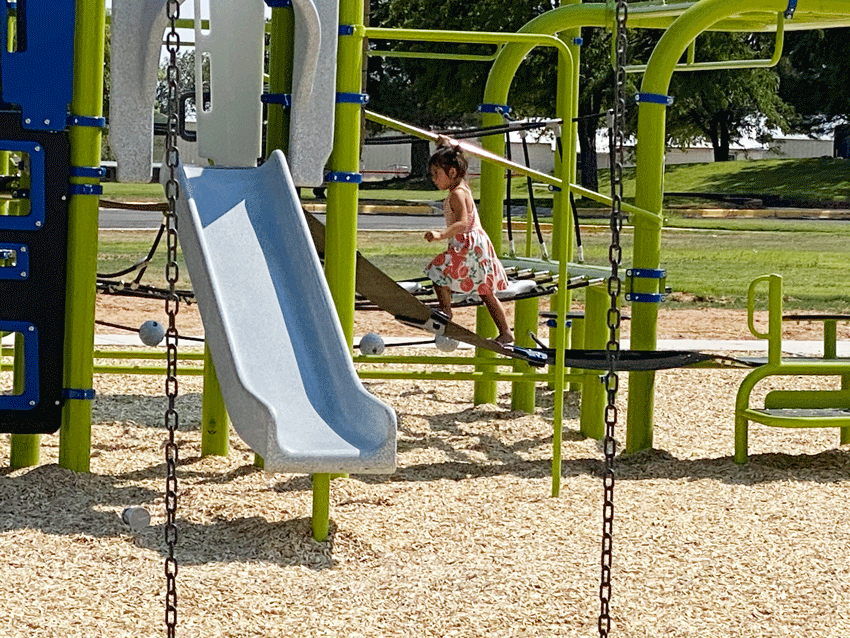 The city also took time to update the sidewalks that lead to the bathrooms and around the playground. Ramirez and Sons of Hobbs was contracted to do the installation of sidewalks

The entire project cost $225,257, according to a news release from the City of Hobbs. Mooney said the playground gives a safe place for kids and their families to go.

“We want to make sure everyone has a place to play,” said Mooney. “Now there is an opportunity for kids of all ages and abilities to get outside and enjoy outdoors. …It is a great place for families to hang out.”

Del Norte Park is located at 4314 N. Grimes St. in Hobbs. For questions or give comments contact the Parks and Open Spaces Department at 575-397-9291.