On any given day a police officer will have to make many split-second decisions. Those decisions can be the difference in life or death.

The Lea County Sheriff Office now has a visual way to re-live events law enforcement officers all over the county had to make in a split decision on, or a possible new scenario they again will have to make a decision on, with a new simulation training system the department has been putting to use.

When a law enforcement officer goes to work they don’t know what could be faced — maybe an active shooter, suicidal person, aggressive dog, or false claims from a person. Officers wear many hats every day and no call will be the same as the last.

Choosing to pull out a taser or pull a gun can be highly criticized by the public, especially when life is lost, but what about lives they saved?

“The decision that officers have to make out in the field, which are split-second decisions, on what action to take,” said Vivian Martinez, Public Information Officer with the Lea County Sheriff’s Office. “When you lose your qualified immunity, you’re very vulnerable. You, your family, your lively-hood is everything on the line. Before it was our lives, now it’s the lives of our families.”

Imagine in a park, a woman is reported to have a gun. An officer asks her to put it down and she refuses, while the barrel of the gun is pointed at the officer.

What would you do?

The officer shoots and goes to pick up the gun and finds it is a toy.

Or, the officer assumes it’s a toy, and is a real gun with the tip painted orange. She shoots and kills the officer.

In the new TI Training Lab that the LCSO installed this year, thousands of scenarios can have officers learn and practice taking control of different events — in real time.

The training system is created and updated by a company in Colorado and helps keep an officer’s mind sharp said deputy Travis Hobbs, with LCSO who operates the system. He said all deputies spend at least 30 minutes month training with the system.

“Everyone gets the opportunity to come in here,” said Hobbs. “All of the corporals on shift are assisting with the training aspect of it.”

The simulations range from domestic violence, burglary, courts, assaults and batteries, active shooter, current events, and even a zombie apocalypse.

“(It) gives them new exposure, something they may have never seen before or they could encounter in the future,” said Hobbs. “Just keep that brain constantly working.”

In 2014, Albuquerque officers were involved in the call of a man illegally camping. The events lead to the death of James Boyd, a homeless man that was mentally ill and threatening the officers.

Boyd was shot following a four-hour standoff and both officers stood trial for charges of second-degree murder.

What would you do? A man wielding a knife and making threats, would you shot or take your chances? Can you talk them down? What if they charge at you?

The LCSO deputies can face this scenario to learn from past officer’s mistakes or even their successes.

The case of Boyd was highly criticized, according to Hobbs. After national attention the State Attorney’s Office announced in 2017, there was insufficient evidence to prove a violation of the federal law.

“These scenarios that make national headlines, the company will try to recreate if they get word of those,” Hobbs said. “Our deputies can kinda be in that same position. Do they make the same decision or not. That really helps out just to get your mind working.”

The company updates the scenarios, especially the current events, as frequently as possible, according to Hobbs. 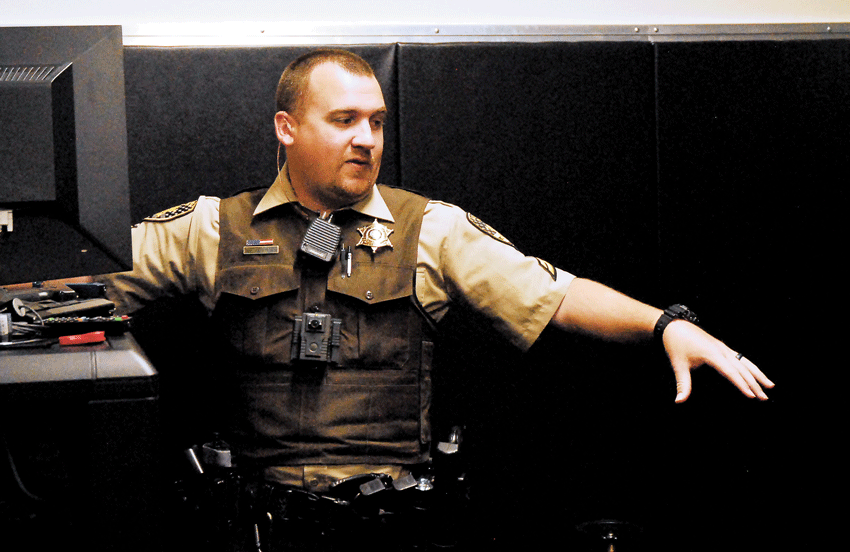 In the simulation, officers are able to use multiple weapons including a handgun, taser, pepper spray, and a patrol rifle. Giving the officers the option of what they will use in a scenario.

“It’s the most realistic training I’ve seen,” Hobbs said. The officers are able to speak to the screen and will get a response from the simulation, based on what the officer says.

Suddenly during a traffic stop, a man holds a gun to his head. What would you say to have him put the gun down?

An officer may say, “Calm down sir, please put down the gun.”

The simulation could respond with “I am not going to calm down,” and pull the trigger.

What did you do in the miliseconds you had to act?

“If you don’t give them that command you won’t be able to articulate if you’ll have to use force and the reasons why,” Hobbs said.

Like in many situations, during a domestic call an officer never knows what could happen. The victim could become the aggressor in an instant.

Now while trying to calm down the partner a man brings out a knife and holds it on his partner’s throat. Do you grab the taser or the gun? They are too far away to place yourself between them. What do you do? You only have micro seconds to act.

A taser is always held on the opposite side of the body from the law enforcement officer’s gun, for safety. But taser’s are not 100% effective, according to Hobbs.

“It’s a piece of machine, it can malfunction,” said Hobbs. “If it malfunctions and I have someone coming at me with a weapon or something like that. Those barbs don’t connect, or the machine does work. I want to have my strong hand, my gun hand, to transition if I have to.”

Although it is a less-lethal option, it is still a use of force. A taser is used to stun an aggressor, and the stun will last five seconds, according to Hobbs. The trigger can be pushed multiple times for an additional five seconds.

During a traffic call regarding a woman sleeping in her vehicle at a park. An officer asks for her license and registration. She argues with hand gestures before grabbing a gun, and pulling the trigger — bang! She shot the officer. What would you do? How would you react? Did you even see she had a gun? Would you have used force so that she didn’t shoot you? You only have half a second to make the decision? What decison did you make?

One thing every scenario has in common on the training system, and in real life is officers have to pay attention to their surroundings and be on constant high alert.

In each of the hundreds of scenarios, officers don’t know what is going to happen just like on the street or when responding to a call.

“One of the things that we look at in a situation that is unknown,” Hobbs said. “We never know what’s going on. Law enforcement is going to be concerned for the citizens that were around and that we are also taking care of ourselves.”

Christina Rankin may be reached at courts@hobbsnews.