The News-Sun put out a survey on social media asking for your responses to 10 questions. As of 12:30 p.m. on Friday, the News-Sun received 569 responses, an interesting snapshot of how Lea County has responded to the pandemic. Results of the 10 questions can be found below.

The following are the responses to the 10 questions: 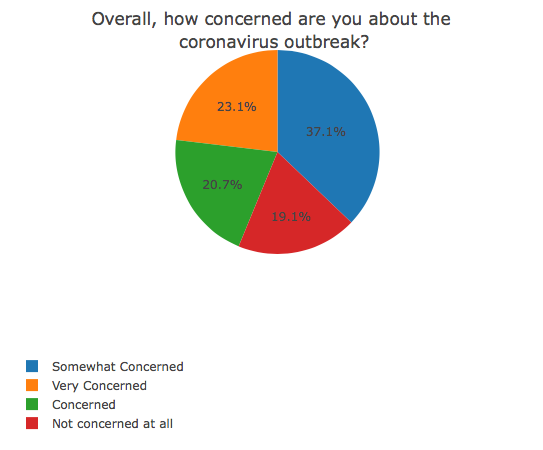 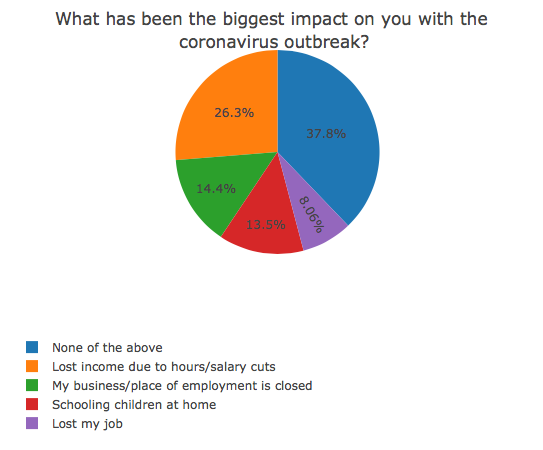 Everything from “open everything back up” to “keep everything locked down” were mentioned in the several hundred comments left by respondents. Businesses being closed, regardless of which side survey takers were on, was at the forefront of their comments.

“Everyone should comply with Governor restrictions…and have patience so virus can clear out and we will be clear of it,” another said.

“Everything has been taken extremes. Business shutting down and the one next door allowed to be open, killing some businesses, let them open, and have them impose there restrictions for distancing and PPE requirements,” a third female said.

With the next question on precautions people have taken, respondents could pick multiple choices. The potential responses were 1) wearing gloves; 2) wearing mask; 3) staying six fee distance from others; 4) only going out for essentials; 5) none, I tried but am not succeeding at doing most of those ; and 6) none, I don’t think they are necessary.  (We apologize our chart cuts things off. Working on correcting that) 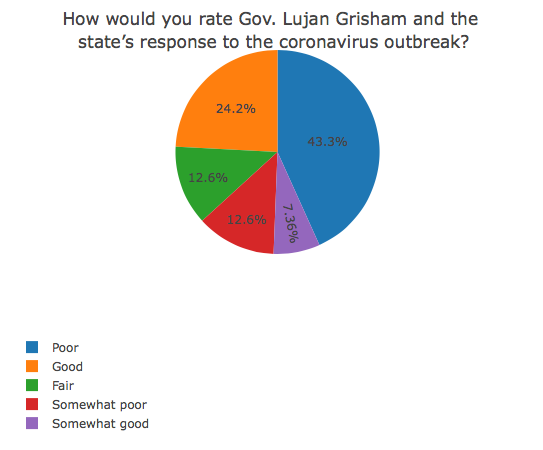 “While precautions may have been necessary our state government has shown that they cannot handle every county in the correct manner. It’s time for governor Grisham to hand back control to local governments. We do not need her babysitting us or having tattle tales on our small businesses,” said a survey taker.

“The governor should be removed from office she’s out the hurt small businesses,” one male respondent said.

“We have done what we were asked. Enough is enough. Leave restrictions A bit longer in hot spots and let the rest of us get back to living. It’s taking an emotional toll on us all,” another said.

“Governor Grisham needs to be removed from office for her multiple violations of the constitution,” yet another echoed.

“Very proud of our governor who is just trying to keep us all safe and healthy during a time so challenging,” a male respondent stated.

“This is all a political scam! The virus is real but the numbers are inflated! The dems want the country to crater and blame it on Trump! This is the only way they can get complete control thru scare mongering! The American people better wake up and fight back or the freedoms we have will be completely destroyed,” said a female critical of the governor. 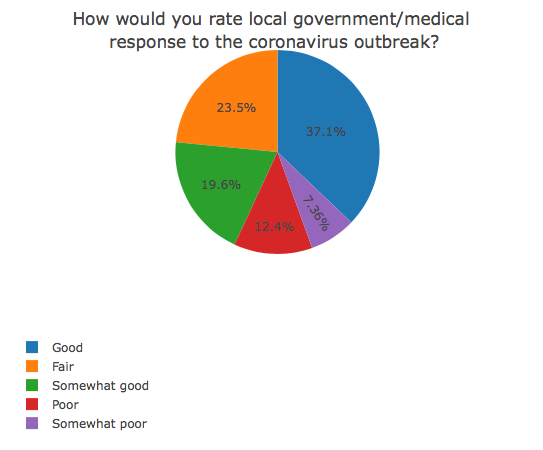 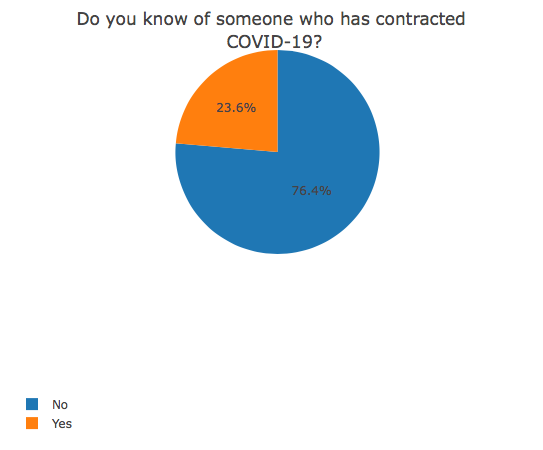 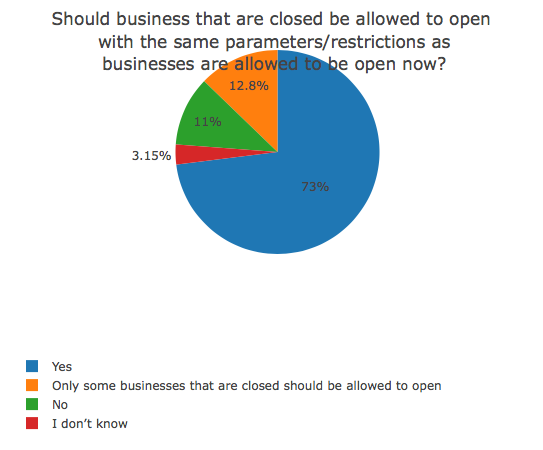 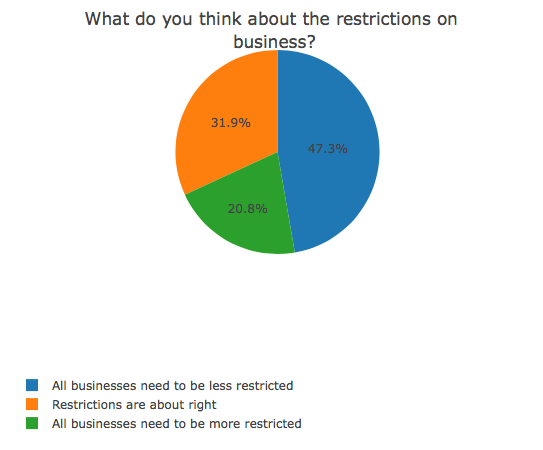 “It’s ridiculous that hundreds crowd into Walmart and small businesses selling the same products are not allowed to be opened. I’d much rather go to a smaller cleaner store to purchase items especially when there’s concerns about safety,” a female respondent said.

“There is too much bickering going on regarding closure of businesses,” a male respondent said. “I believe that smaller stores should be treated the same as the larger ‘big box’ stores and allowed to open up with safeguards in place.”

“I believe we are killing our economy in fear of a virus that has very low mortality rate,” one survey responder stated. 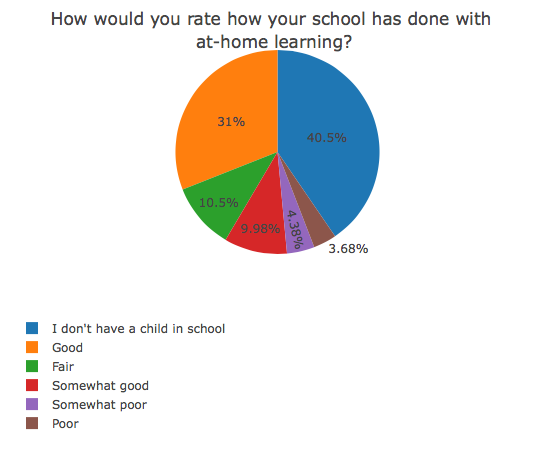 If you did not take the survey, you still can. TAKE THE SURVEY 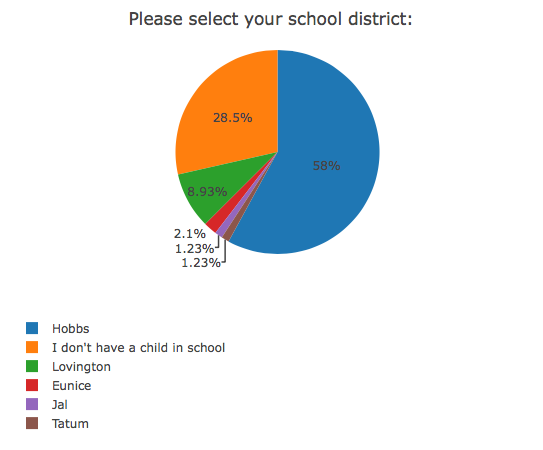