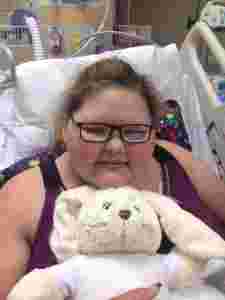 Katie Gutierrez, 19 of Eunice, is fighting for her life.

Gutierrez suffers from a form of cancer called craniopharyngioma and with her last brain surgery on Aug. 9 causing a stroke in her brain stem, her battle for life is getting tougher.

Katie was diagnosed with craniopharyngioma, a brain tumor derived from pituitary gland embryonic tissue, on Sept. 10, 2009 when she was 11 years old and had her first brain surgery. Since then Katie has had 11 to 12 surgeries. She is completely blind in her right eye and only has partial vision in her left eye.

“It’s kind of been a whirlwind since then,” said Amy Gutierrez, Katie’s mother. “We’ve done chemotherapy and radiation and have been back and fourth to Albuquerque over and over again. The last big surgery before this one they went in and at first they said the tumor wouldn’t grow back. Now they’re saying, in the last however many years, they discovered this type of tumor just keeps growing and there is really not a lot that they can do.”

Katie went into surgery in early August because pressure from the brain tumor was pushing against her optic nerve, which would cause her to lose her vision completely and quickly.

“The surgeons were saying, ‘It’s going to be a simple surgery. We’re just going to drain that fluid off that optic nerve and you’re going to be out of here in five days top,’” Amy said. “Of course the major setback was the stroke. They think it happened the night of the surgery.”

As of Thursday, Amy said Katie has not been able to wake up since her surgery on Aug. 9, but is responsive to some commands. She is also connected to a breathing tube.

“They’re doing tests … trying to figure out why she’s not waking up,” Amy said. “They’re not saying she’s in a coma because they have brain activity and she can answer commands sometimes. She’ll actually grab your hand and when you tell her to let go she’ll let go.”

Amy and her husband, Kevin, are keeping their faith alive and hope Katie will wake up soon and is able to recover. Amy said Katie is a strong fighter and has accepted the life journey she’s on.

“The night before the surgery we went to her favorite (place) Chick-fil-A and we told her, ‘If you decide that you don’t want to do this surgery we will support you. If you just want to see what happens and take your chances.’” Amy said. “She looked at her dad in the face and she said, ‘No dad. I want to fight.’ She always says she knows this is her journey that the lord has set for her and she has accepted the challenge. She’s such a sweet girl.”

“Even though she (doesn’t) feel good and she’s loosing her vision and her cancer is terminal she didn’t take that like I’m going to sit at home and feel sorry for myself,” Amy added.

Although Katie has had to battle a brain tumor and live with impaired vision, she has tried to live her life as a normal teenager. She graduated from Eunice High School in May 2017.

Along with staying involved in school activities she also would speak at events, most recently at a cancer fund gala in Albuquerque. Katie said her illness does not hold her back from living a great life.

“I want everyone to know that my brain tumor doesn’t define me,” Katie said, during the gala. “It has made me into the person I am today. I hope my fight is an inspiration to others.”

The Gutierrez family has a GoFundMe account set up to help with Katie’s medial expenses and traveling costs to Albuquerque. To make a donation visit www.gofundme.com and search for Katie’s Journey 2015.