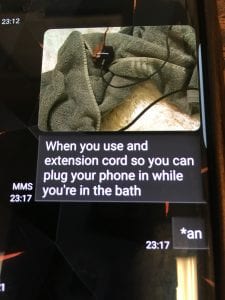 Before Madison Coe died in an accidental electrocution in a bathtub, one of the last text messages she sent was to a friend of a photo of an extension cord with a message that said, “When you use (an) extension cord so you can plug in while you’re in the bath.”

Lovington Police Department officials said the photo is believed to have been taken shortly before she died from an accidental electrocution in Lovington early Sunday morning. Madison’s parents, Logan Coe, a Lovington firefighter, and Angela O’Guinn-Downs gave Lovington Police officials permission for the image and text message to be shared with the public.

Lovington Police officials said they do not when the federal agency’s final report will be released.

Madison was using her Samsung S6 Edge cellphone while taking a bath. Evidence found during the investigation shows she plugged the cellphone into a phone charger cord that was plugged into an extension cord, which was plugged into a non-GFCI, non-grounded bathroom wall outlet, according to Lovington Police officials.

Evidence found shows Madison took precautions to keep the connection of the cords dry, but it is believed she was not aware of an area of fraying to the extension cord. Forensic evidence indicates she came in contact with that frayed area on the extension cord while she was in the bathtub, resulting in her electrocution.

Felisha, Madison’s step-mother, said she hopes Madison’s story will be a wake-up call to other parents to watch their kids more closely.

“Pay attention to your kids, pay attention to what they are doing and keep the damn cellphones out of the bathrooms and out of the swimming pools,” Felisha told the News-Sun on Monday. “Love them every day like it was the last because you never know. We go on like we are guaranteed tomorrow and we’re not. You never know that today may be the last day that you get to hug them, kiss them and tell them you love them so do it often. We miss her. We hope that no other family has to suffer or experience what we are going through right now.”

At around 12:24 a.m. Sunday, Lovington Police officers and emergency medical personnel responded to a report of an unresponsive juvenile female at the 800 block of West Ave. H.

A GoFundMe account was started by Carl Christensen, Lovington EMS Coordinator, and his wife Crystal to help the Coe family with medical expenses and funeral costs. The goal is to raise $20,000. By 5:30 p.m. Friday (five days into the fundraiser) 236 people donated $12,157.

To make a donation visit www.gofundme.com and search for Madison Coe Memorial Fund.