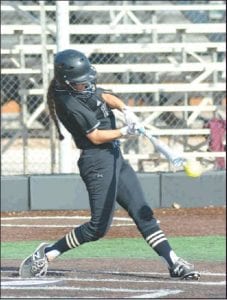 Summer time is meant to be full of fun.

An opportunity to sit back, relax and enjoy each moment to the fullest.

That’s the case for a handful of Lea County student-athletes and coaches who are participating in a wide range of sports as part of the New Mexico High School Coaches Association North/South All-Star series in Las Cruces, Albuquerque and Rio Rancho.

But for Hobbs Lady Eagle softball players Addison Lewis and Amy Vejil, it’s no time like the present. Both got to practice as part of the South All-Star team made up of players from Carlsbad, Artesia, Los Lunas, Las Cruces, Roswell and Deming.

“Man, this is a really great experience,” said Lewis, who plans to catch at least one game during the three-game series that starts at 4 p.m. today and continues with a doubleheader tomorrow starting at 10 a.m. All of the games will be held at Rio Rancho Cleveland High School.

“What’s really cool is that you get to meet new girls who you only know as an opponent you faced throughout high school ball,” Lewis continued. “It’s a lot of fun to get to play with some of the best softball players in this part of the state.

Vejil said her excitement is getting to know her new teammates.

“It’s really exciting to get to know the person behind the player,” she said. “We have spent some time together talking, getting to know each other. It’s nice to play some games where there isn’t any pressure. We all want to go out there and have some fun.”

But also win. Lewis said that while having fun and relaxing is key to the weekend, that won’t be enough to hold down the competitive juices.

“I’m going to wear an Artesia Lady Bulldog uniform,” said Lewis, who will be switching uniforms with Artesia’s Aubree Olguin. “It’s going to be weird. I have never worn orange before.”

“I was head coach of the South All-Star Team in 2012 and I was lucky enough to have the opportunity to coach my oldest son Cameron,” Crawford said. “This time around I am just as lucky with getting to coach my middle son Christian, as well as two great players from Hobbs in Sagar and Kennedy.”

Crawford said he is just lucky to be coaching again five years after his debut and said him getting to be coach is the ultimate accomplishment. “You are picked from your coaching peers to be the coach,” Crawford said. “I feel really honored to have been chosen by my fellow head coaches to coach the South team again. It means a lot to me, but it’s also good for Lovington tennis and how it is being recognized throughout the state.”

Tennis isn’t like most other sports, that is broken down by class as it features student-athletes from all classes.

“We have a pretty good team this year,” Crawford said. “The boys and girls are solid and we had a practice today that was very encouraging.”

While Crawford would like to win, he understands this is a showcase for the kids.

“We didn’t win back in 2012, but what was exciting is that the All-Star tournament coincided with the Coleman Vision professional tournament,” he said. “We had the kids play all day and the pros would play at night. What was great was that some of the all-star matches would run long and the spectators who showed up to watch the professionals, would first watch the kids. That was exciting for everyone.”